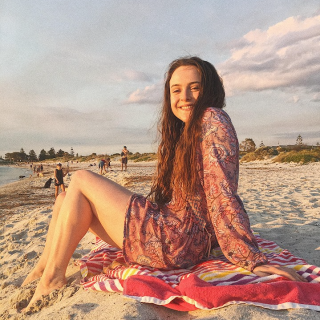 I am a 20 year old who is learning about how to live a life that I am proud of without the crippling fears that seem to hold us all back from living our best lives. I love adventuring, creating, exploring, listening, dancing, learning and connecting with people of all kinds. Gimme some ocean, nature walks and long chats about the universe anytime and I shall be a happy gal.

Before anyone makes fun of me for reading such a generic teen book, let me tell you, I never thought I’d be into this kinda thing as a 20 year old ‘mature’ adult. But here I am. I can’t help it. I like to read young adult, okay. Leave me alone.

This book was a pleasant surprise to me. I hadn’t expected much, having read one of Stiefvater’s earlier books when I was a pre-teen, which I think I loved at the time only to find out that it was rather rubbish as I grew brain cells. But this one, I liked, but maybe that’s the loss of brain cells after a few too many drinks on separate occasions.

This story is based around our main character Blue, a quirky teenage girl who grew up in a household full of psychics. I felt like I had read about her before – there was nothing too special about this one. Except that she liked to make her own clothes and seemed to be kinda angry at the world, but this seems to be pretty standard nowadays, especially in book world. Even so, I found myself growing rather fond of her seemingly typical quirky teen personality, although I felt like she could have been developed a little more as a character. And then we have the raven boys, a group of preppy school boys who go to the local rich kids school called Aglionby college. Now these boys, I liked. I felt that these characters were fleshed out, complex and genuine, and I liked the way that they all brought something a little different to the book, instead of all being carbon copies of one another. Trust me, having known many rich school boys in my days, it is not a common thing to find. But nevertheless, these characters were each well written, complex individuals, who I admit, I fell a little in love with. Our leader of the Raven boys pack, Gansey, is a multifaceted – sometimes a little offensive – rich kid that has an obsession with a foreign king who is rumoured to have been buried along the ley line which runs through the town. Then we have Adam, the not so rich kid who lives in a trailer park home with an abusive father and submissive mother, who resents all the rich kids around him and has to work his ass off to go to Aglionby college to escape the confines of his abusive home and make something of his life. Ronan, the least likeable of the lot, was an angry, despairing, grieving bad boy character who liked to skip school and get into fights. Finally, we have Noah, a quiet observer who seems to see everything and say very little. Together, this complex group made for a very interesting story.

The storyline of this book had me a little confused at the beginning. A ley line? “What the F*** is that?” I said to myself while squinting at the page.  After I hit up my old mate google, and found a crap tonne of very interesting stories about ley lines, I was a little less confused. And also, how cool are ley lines! If you are like me and were not informed about what these mysterious lines were, please, do yourself a favour and give them a google. But anyway, despite the curious ley lines, the plot of this book and the concepts within it were unique, engaging and so so addicting! Although it may be a little slow, I could not put it down! Magic forests, people! Psychics! Ghosts! And ley lines!! I have to say, I was quite in my element while reading this book. I have a little obsession myself with all things mysterious, and this was very much down my street. The ending had me flipping the page in an exhausted haze late at night, which I regretted in the morning, but still. It was so worth it.

Overall, I freakin loved the concept of this book. I felt connection the the characters, who I wish existed in my world when I was younger. I loved the world of this book, with mystery and magic in a world as ordinary as ours. And I thought the writing was beautiful, descriptive and to the point, which helped to drag me into the world and hold me there right up until the very end.